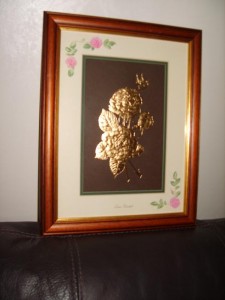 Rare item, a picture of a Golden Rose, Titled ‘Queen Elizabeth Golden Rose’, produced from a hand engraved die then painted with 22carat gold leaf. Made in Association with the Royal National Rose Society from an exclusive drawing by Kristen Rosenberg. Thought to have been made in celebration of The Queen’s 50th Anniversary as Queen.  In very good condition and comes in a good frame.   (click on picture to enlarge image)   (B+75)281109