Augustus John, full name Augustus Edwin John 1878-1961, a Welsh painter, etcher and draughtsman. For a period of time around 1910 he was an important part of the Post-Impressionism  in Great Britain.  Augustus John well known for his brilliant figure drawings, then for developing a new technique of oil sketching.  Many people in London at that period compared his work to the likes of Matisse and Gauguin. Around this time he also developed a unique style of portraiture that was said to be imaginative and very often extravagant, appearing to catch an instantaneous attitude within the subjects in his paintings.  He became very interested in the Romany people and their way of life, for a time he and his family (shortly after his first marriage) travelled around the country in a caravan in Gypsy fashion. He later went on to be the President of the Gypsy Lore Society and held this position from 1937 until he died in 1961. One of Augustus Johns daughters, Vivian John also became a notable painter in her own right. (see her painting on this website)

Feliks Topolski an Artist and Chronicler

Feliks Topolski, a lot of people wrongly spell his name Felix Topolski but they are one of the same and the name is that of a very very talented artist who was born 14th August 1907 and died on 24th August 1989; the son of Edward Topolski (who’s profession was an Actor) and Stanislava Drutowska. Feliks married Marian Everall in 1944, they had one son and one daughter, the marriage to Stanislava was dissolved in 1975 and she died in 1985. Feliks Topolski worked as a war artist during 1940-1945 and pictured The Battle of Britain, sea and air war, Russia, The Middle East, India, China, Italy, Germany and Africa.  He was well known for his drawing type portraits of famous people, from Great Statesmen, other Artist’s, Writer’s, Pop Stars, etc. etc;   which includes Winston Churchill, Randolph Churchill, Prince Philip, Harold Pinter, Evelyn Waugh, Adam Faith, Ghandi and quite a few more.  Also produced a number of short run Limited Edition Lithograph’s which are quite popular due to them being at an affordable price, (in the hundreds price range rather than thousands like some of his original drawings.) Talking about these, I particularly like the pencil and water colour drawing of the artist Augustus John, (one of my favorate artists.)  Feliks Topolski also illustrated many fine books over the years for some top authors and publications.

Artist’s Resale Right’s, is it a good or bad thing, anything that appears to be another tax on the smaller Art Dealers already dwindleing income seem’s to be a bad thing. Personally I feel the threshold needs to be raised from 1000 euro’s, approx. £830 (I think this figure is correct) to around 3500 Euro’s (£2906) or abolished altogether, the better option I think!!! It is felt that the new extension to the Artist’s Resale Right in 2012 will harm an already weakened Modern Art market in Europe and the U.K., a thought that I agree on entirely.

Contempory Art from the Middle East

Market interest in Contempory Art from a range of Middle Eastern countries appears to have been rapidly expanding over the past few years, and has been popular in both the U.S. and in Europe. Christies Auction in Modern and Contemporary Arab, Iranian, and Turkish art sales in Dubai which was held in October, earned approx. $7.3 million and achieved 43 new auction records, of which 22 were for artist’s under 35 years of age. 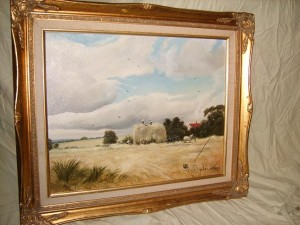 A lovely Old English Rural Landscape scene at harvest time, capturing the enchanting bygone day’s of the horse and cart and sunny days in the harvest field.  The painting is in good condition and comes in a gilt frame, it is signed by the artist, “Wilde-Latham”.  It is thought to have been painted early to mid 1900′s.      (click on picture for larger image.)   See Payment Options.  BIG PRICE REDUCTION!!!!

Oil Painting Portrait of an Elizabethan Gent with a Pistol 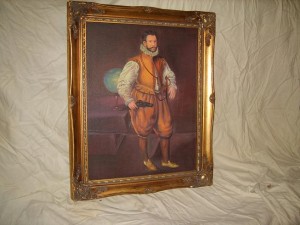 A nicely painted oil painting portrait of an Elizabethan gent brandishing a pistol. Not signed but it is a well painted picture set in a gilt frame, would look nice hanging in a hallway or study.  Size of frame is:  445ml. w.  x  550ml. h; has faults but generally both frame and painting are in good condition and it is thought to have been painted during the early to mid 1900′s.  (click on picture for larger image.)     See Payment Options. 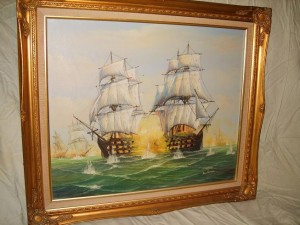 Galleon Under Fire at Sea

Price… including p&p, for mainland U.K.